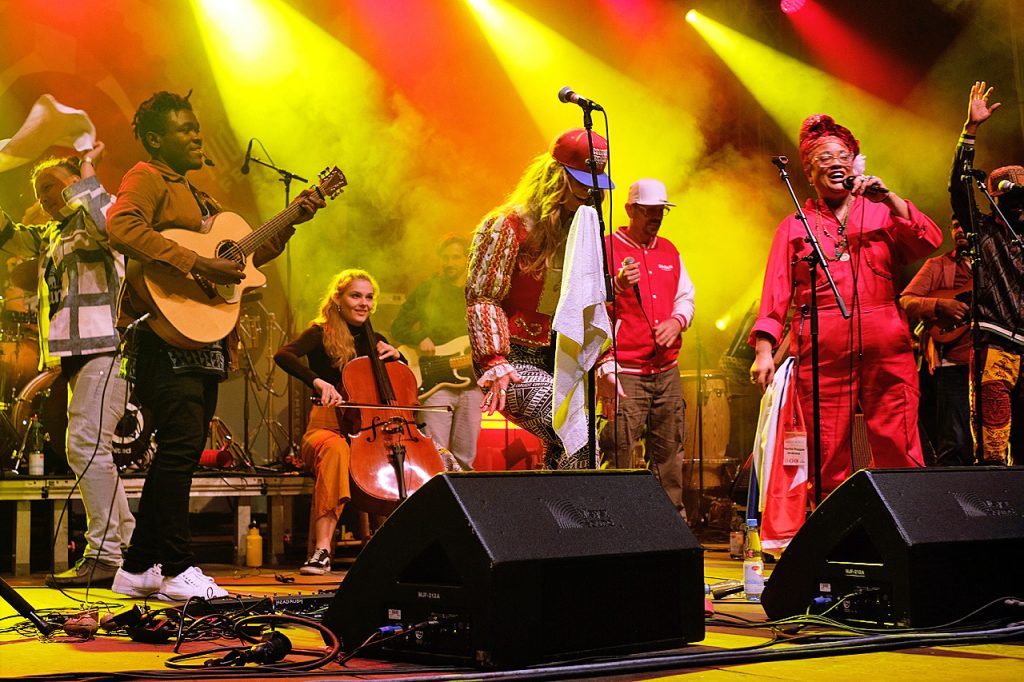 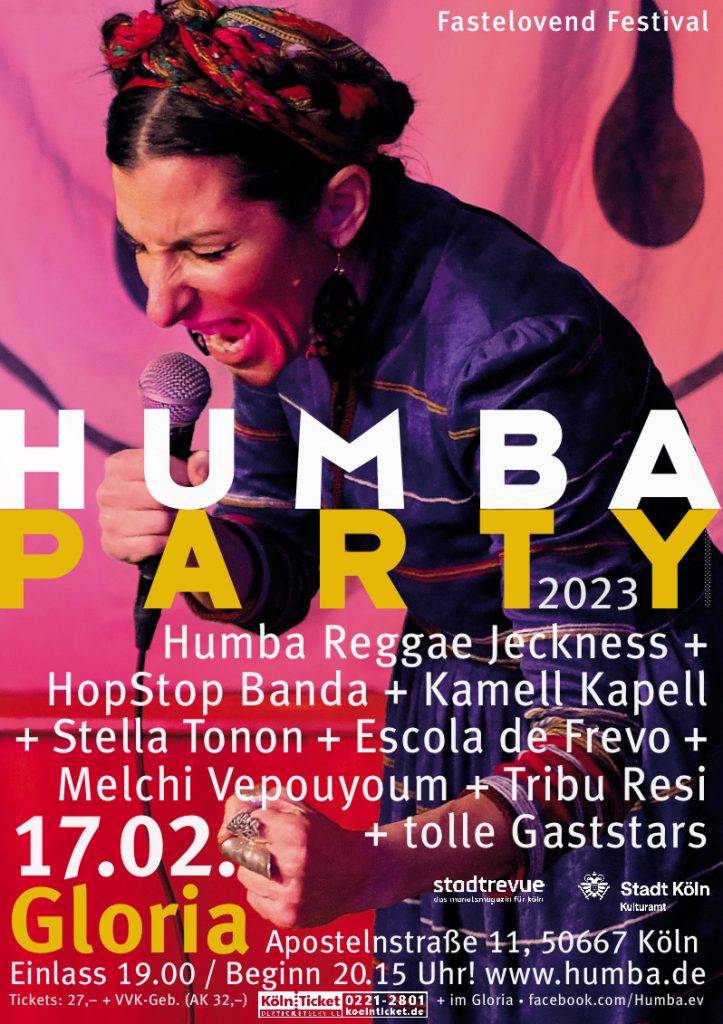 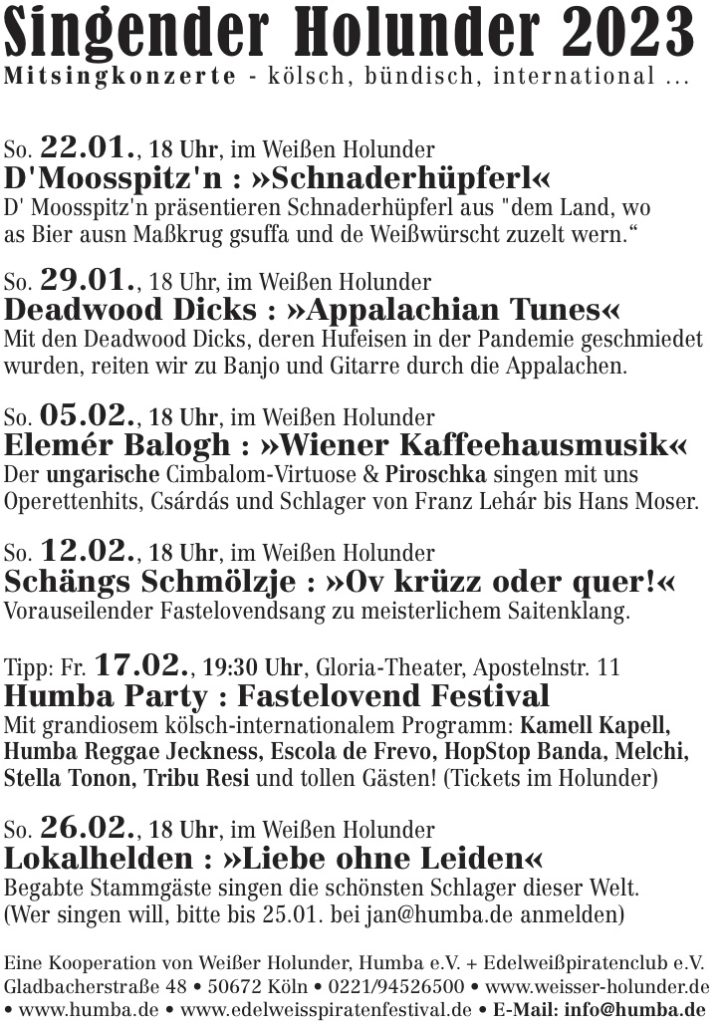 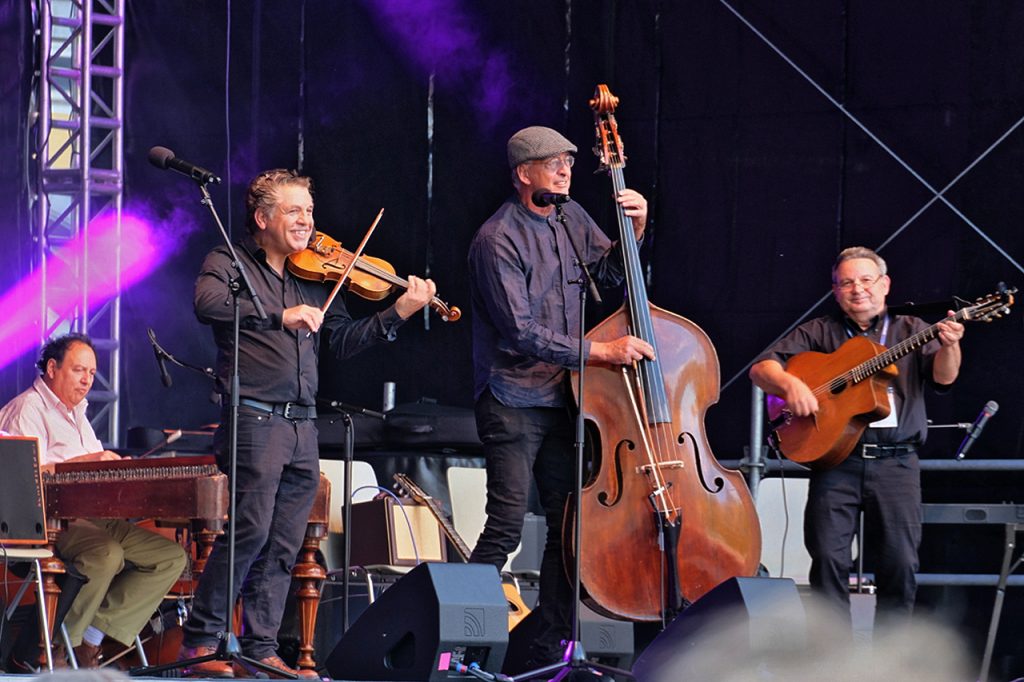 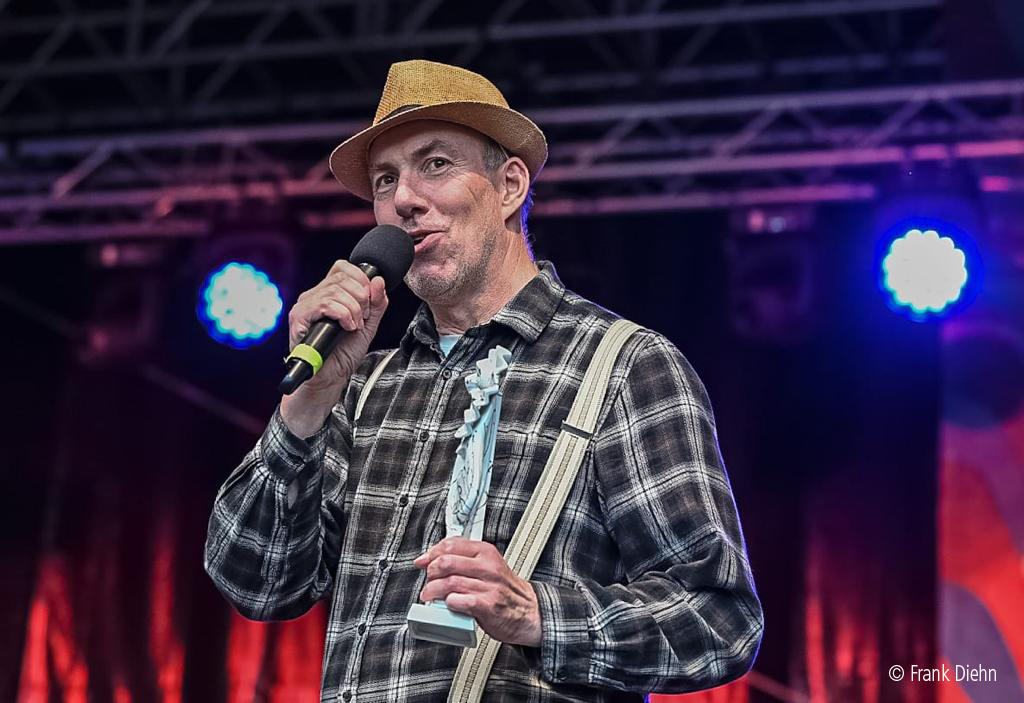 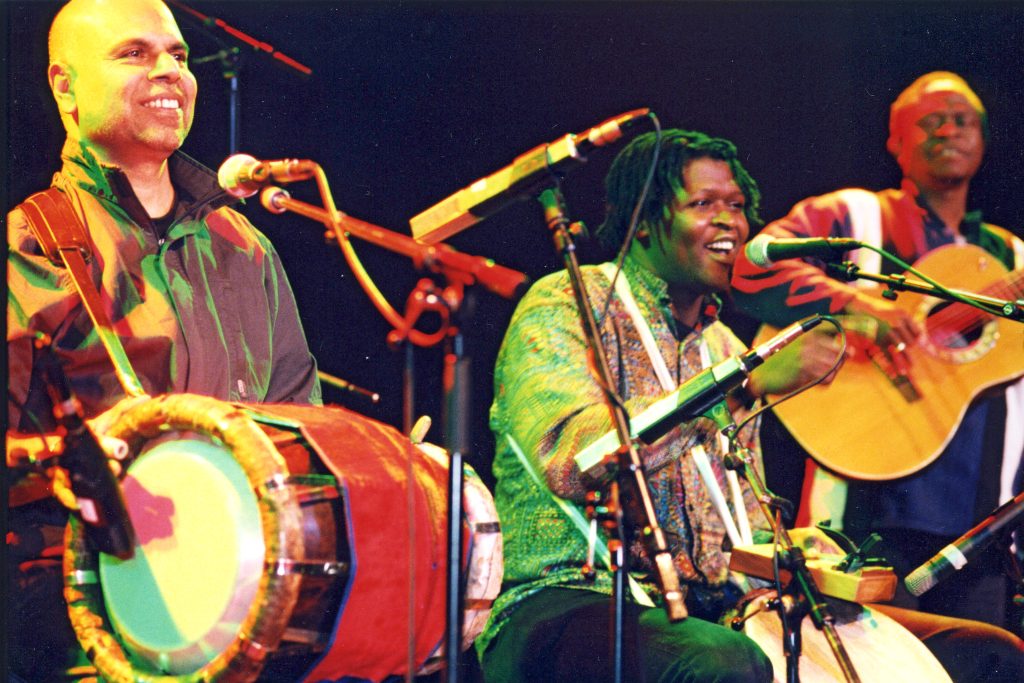 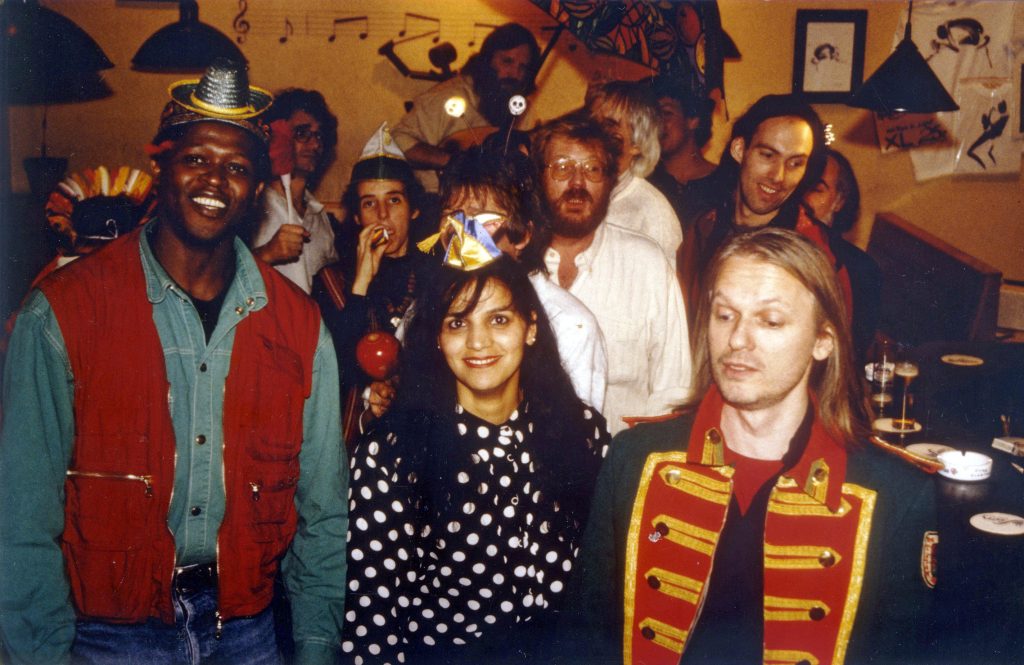 Preserving tradition and promoting diversity is not a contradiction!
Jan Krauthäuser, Vortrag am 14.02.2018 in Utrecht, zur UNESCO-Conferenz:
»Urban Cultures, Superdiversity and Intangible Heritage«

What is the main idea of our Cologne Humba Carnival movement?

The main idea of »Humba« is the combination of the multicultural -, the world music movement of the early nineties with the local tradition of the Cologne area. This was quite new for us, for Germany – and amazingly 23 years later is still new, an exception in Germany.

Like many others, the story of Humba began in Africa. The key impulse for the idea of doing something for the Cologne carnival music came from my first trip to Ivory Coast, in 1992, where I made a music research. But I noticed that the locals had little interest in their traditional music. Most musicians and producers tried to sound as American or European as possible.
On the one hand this was disappointing and alarmed me as a fan of African  music. But on the other hand I asked myself the question: Is it OK to demand from Africans to cultivate their tradition better then we – then I do it in Germany?

That’s why I’ve moved my next music research to my doorstep, to explore the Cologne Carnival music: which roots are still alive? and what exciting new trends exists above the folkloristic mainstream?
– My research was supported by WDR Radio and ended up in a first CD compilation, which was presented at a first Humba Party, in 1994. There was huge interest, because the combination of world music and regional tradition was something new, not only in the Cologne Carnival. And it worked wonderfully right away.

Especially the immigrant musicians, from the Iranian singer to the African bandleader were pleased to be perceived here not only as exotic figures, but as equal players of a Cologne tradition. We had asked each of them, to show us their definition of good Cologne carnival music. That means any song, that people can dance, sing or laugh on our Humba Party.
For some artists it was easy, because they came from another carnival culture, like Brazil, Cuba etc., but other musicians had to transform another tradition into Carnival. We asked a lot of German musicians too, which are not involved in the carnival scene, to create something new, something special for our party. Some of the best results came from the cooperation between musicians from different backgrounds.

Further we encouraged our artists to work with the Cologne language »Kölsch«, which is very important for the local culture, especially in the carnival tradition! We discovered and produced a lot of great rap, reggae, samba or oriental songs in Kölsch and other languages. Until now we released four Humba compilations, plus one CD of our most exotic discovery: »Die Pudelbande« an old women bowling club choir from the Cologne suburbs!

The 23 years of Humba history knows a lot of funny, inspiring little stories I can’t tell you now. But what I can tell you for sure: Preserving tradition and promoting diversity is not a contradiction!

For us, a club of some dozen music maniacs, the next step was to leave the short Carnival season in winter, to bring our knowledge to other occasions. In 2001 we initiated tiny summer festivals in suburban garden colonies, the »Humba-Schrebergarten-Tour«.
Always with at least one traditional Cologne band and one “exotic” ensemble – African tradition, Persian classic, Indonesian gamelan etc. based in Cologne. – This experiment worked also well (legendary!) until the public financiers got off.

One summer tour in 2004 we dedicated to the Edelweisspiraten, a youth resistance movement during the Nazi dictatorship. This movement was very strong in Cologne and it was mainly a music movement. We had the pleasure to get in contact with some of the old Edelweisspiraten! Together with them we designed a tribute festival with five little stages in the beautiful »Friedenspark«. About 25 very divers bands performing since than every year for the honour of the anti-Nazi-youth-movement. Nearby 5000 people also get information and contact to time witnesses. The Edelweißpiratenfestival is an important living monument for Cologne history now!

Our next enterprise was to help the Cologne Gypsy community, to preserve and to promote their old, fascinating culture. Some good friends and Humba-musicians Markus Reinhardt, Rudi Rumstajn & Co would like to organise a big Gypsy Festival in the middle of Cologne, as sign of power! They don’t want to be seen as victims any more, even not by the political correctness scene! They call themselves proud »Zigeuner« and that’s the name of the festival: »Rheinisches Zigeunerfestival«. An invitation of the local Sinti community to the worldwide gypsy culture, to show their diversity and their unity. The result funded by public institutions (LVR, NRW Ministry, City of Cologne) was a triumph with about 3000 spectators. We managed it three times in ten years and hope, to establish it regularly. Because it really works as a cultural motor with a huge social effect. We also organise a lot of concerts in a friendly church, workshops with refugees and kids etcetera. And, to come back to our carnival soul, we made the first  Cologne Gypsy Ball together with the biggest Cologne Sinti community. This year we will realize a Gypsy Wagon Tour with culture and information in several parts of the region. For this we will bring one of the historical Wagons back, that the Nazis had stolen from Markus family.

I hope I could give you a little insight in our crazy, global, local carnival society – showing the biggest projects of Humba and partners. All of them are based on local traditions or themes and are driven by music and our philosophy of progressive, cosmopolitan »Brauchtum«.

You are cordially invited to visit our festivals in Cologne. And if you can’t manage to see our big events, join our weekly sing-along in one of Colognes nicest pubs »Weisser Holunder«, where we sing every Sunday another theme: Edelweißpiraten-Songs, Kölsche Songs, Songs in Turkish, Greek, French,  Portuguese – Christian song, communist songs, shanties etcetera.

Diversity is always a part of a living folk tradition! 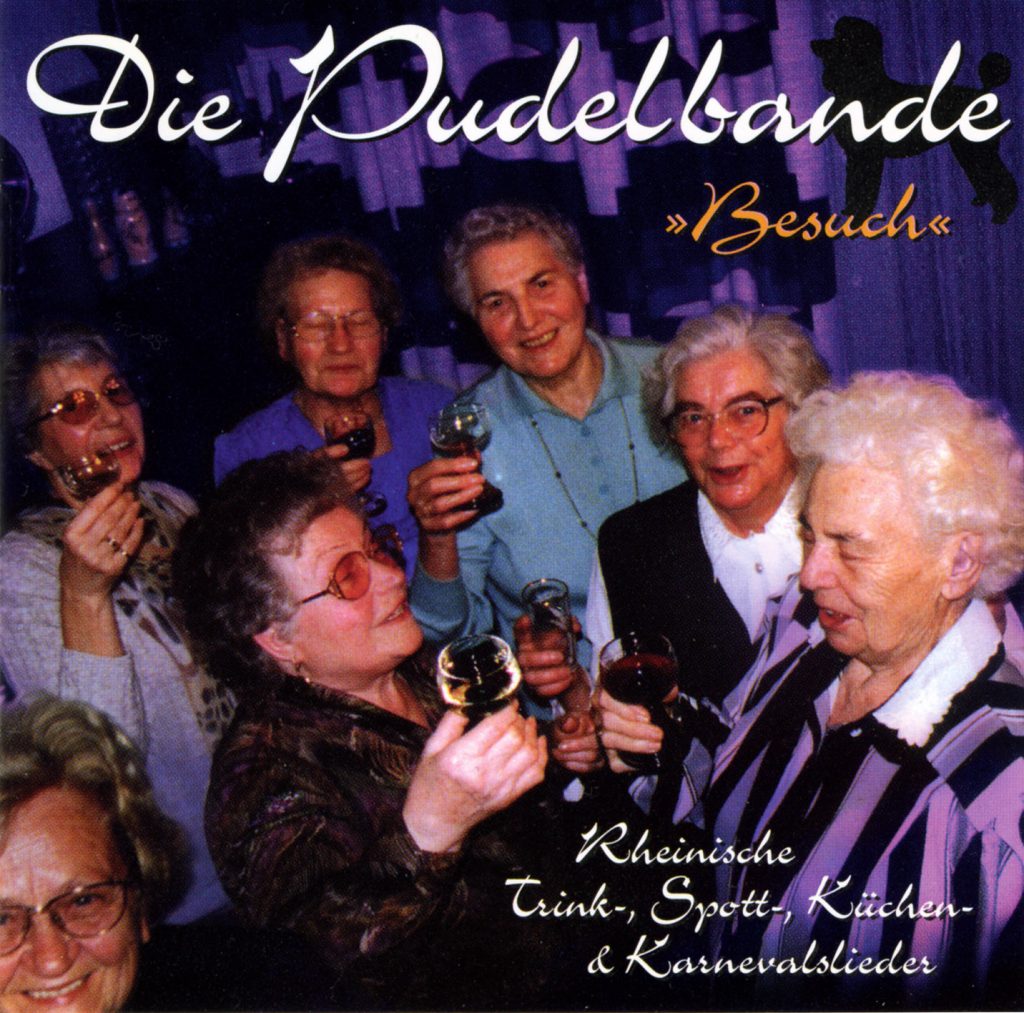 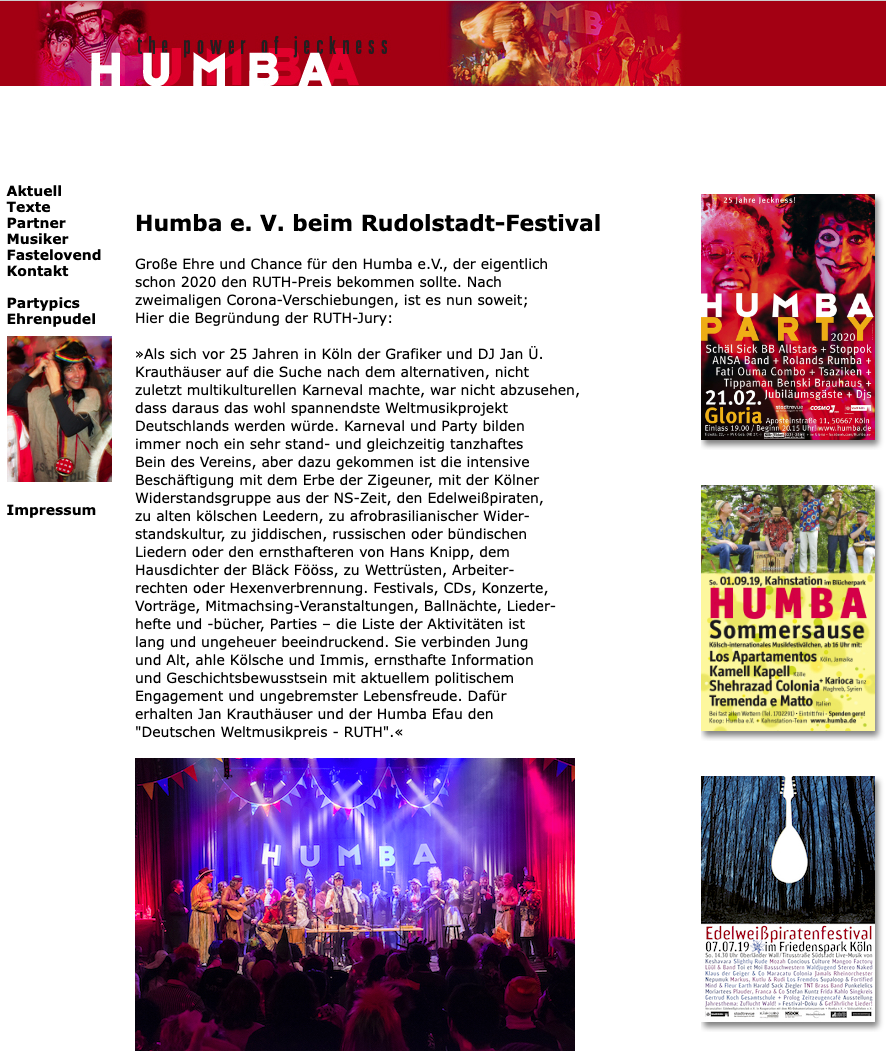